Kevin Sinnott specialises in large scale, figurative paintings with rich brushstrokes which capture striking moments in ambiguous stories. These moments are always telling, often steamy, and frequently feature landscapes or details from his Welsh homeland, where one of his most popular paintings, Running Away with the Hairdresser, hangs in the National Museum of Cardiff. His latest work continues in a similar vein, but, as usual with Sinnott, there is a reworking and reinvention of themes. The exhibition’s title, Domestic Species, hints at the contrast between the familiar and the exotic in this show, which interweave to create a heady new world.

In his last set of paintings, shown at the Martin Tinney gallery in Cardiff, Sinnott used a challenging palette of colours, with surreal and vivid hues. While these have been dramatically toned down, the colours are still heightened, contributing to the visual impact of the works and contributing to the sense of an altered reality, a dream universe, in which these paintings take place. Red is much in evidence, in the many skirts lifted by the wind, or in the clothes gusting on washing lines – both leitmotifs in Sinnott’s work – as well as in the flushed faces of his characters.

And no wonder they’re a bit het up. “Domesticity is only on the surface, yet it provides the tension that real passion lives off,” says Sinnott, and his figures are certainly involved in ardent pastimes. Hanging Out (2014) sees a man and a woman pegging washing in a high wind, the man stripped to the waist, the woman’s top rising up over her midriff, while around them teenagers, children and geese frolic and cling. They create a fertile utopia, familiar but also singular. As in all the paintings, the characters’ faces are either obscured or their gaze is averted, adding to the impression that they are moving through a waking dream.

The mystical element is upped in paintings which feature domestic animals rendered gigantic through a trick of perspective, a new development in Sinnott’s work. Cock a doodle do (2014) sees an outsize cockerel seemingly pitted against a woman hanging her washing, his beak level with her chest, his crest pressing against her torso. As showy as the cockerel looks, his bluster is inevitably comic, while the woman is oblivious to his courtly strutting. In Three of Each (2014), three humans are matched by three outsize geese who take centre stage, each looking in different directions, more alert to the real world than their dreamy human counterparts. Like many of Sinnott’s figures, the people seem at risk of being carried away by the gust.

Another fairytale alliance between man and beast is presented in Restraint and the Stray Goat (2014), where the wind-buffeted figures are joined by the eponymous goat. The restraint is provided by the man who averts his gaze from the knickers flashed by a wind-fluttered red skirt. In the equally saucy Weak Days (2014), it may not be the wind causing a naked woman to trip behind her washing line, her drying bras preserving her modesty from the eyes of the viewer. The man she clings onto seems unsure what to make of it all, his hand reaching up to scratch his head as her hand reaches for him.

The more experimental Try! (2014) is the only painting without a scenic setting. On a dark background, a man dives headlong into a naked woman’s lap while simultaneously slapping a rugby ball to the floor, scoring in more ways than one. Balancing the composition is a partial outline of the Welsh dragon of the national flag, continuing the rugby metaphor with something of an insider joke. 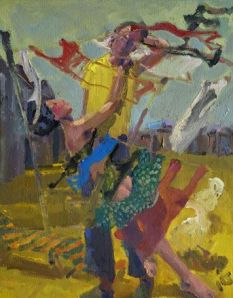 The natural world is the backdrop for much of Sinnott’s work, but here it takes a central role. Animals become active participants and the wind is so strong that it has a presence, provocative and rhythmic, raising passions along with skirts. The repeated gesture of bare arms raised to hang washing becomes a tribal dance, its dancers not in full control of themselves, but in a somnambulant trance, moving to the wind along with the laundry. While Sinnott, as ever, shows a fascination with the interactions between people, he is now also interested in the forces which subsume the individual, like nature and instinct, myth and rite. The movement across the canvas is enchanting.

Domestic Species is at Flowers Gallery, Cork Street until 17th May 2012

Writer, reader and art fiend END_OF_DOCUMENT_TOKEN_TO_BE_REPLACED
This entry was posted on Sunday, April 13th, 2014 at 5:31 pm and tagged with artoholic and posted in Art, Contemporary Art, Culture, Exhibition, Flowers Gallery, Gallery, Kevin Sinnott, Lifestyle, London, Martin Tinney Gallery, Modern Art, Painting. You can follow any responses to this entry through the RSS 2.0 feed.
« A love letter to Jeremy Deller and his English Magic @William Morris Gallery
The Human Factor @The Hayward »