This is an exhibition of self-portraits created specifically for this show, all within the last year, either drawn or painted. Its participants take a risk. None would consider themselves a portraitist. Few would volunteer a self-portrait, bogged down as the genre is by history; tired, self-regarding, a pastime only for the masters, or simply irrelevant in the Instagram age. Choose your poison. Yet, as the show’s title and criteria imply, a contemporary take on a classic form reveals that selfies aren’t only for Facebook.

Good things come in small packages, suggests Maggi Hambling’s Untitled 2013 (Self-portrait). Thick blobs of paint both hide and reveal Hambling’s face, making it waver, ghost-like, on a pure-white canvas. As the show’s opener, it introduces the central theme; that of now-you-see-me-now-you-don’t. 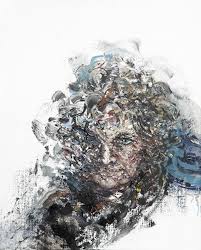 Tim Lewis, with his Self Portrait (2013), manages to disappear almost entirely. He presents a steel contraption which mechanically sketches his face on the wall. This is one artist who really didn’t want to draw himself. In stark contrast, the massive linen canvas of Fear No.1 (2013), by John Keane, catches the artist with his face tense and his brow creased. Both Keane and Lewis seem to have had the same reaction to their brief, but while one found an ingenious way around his shyness, the other chose to flaunt his fear by blowing it, literally, out of all proportion. 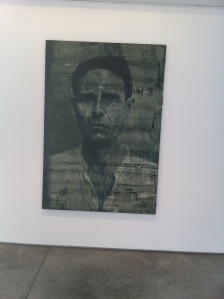 Tai-Shan Schierenberg’s Self Portrait (2013) is an interesting counterpoint. Cigarette in mouth and chin raised, the artist asks the viewer, ‘WTF are you looking at?’ Yet his eyes don’t quite meet yours as he issues his challenge, and the crease in his brow looks familiar. Is it contempt, or is it the same fear that was on Keane’s face? 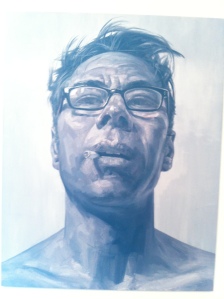 The theatrical element, the pose as performance, recurs in Peter Howson’s Self Portrait (2013). His vigorous pastels depict the artist with wild hair as outsider, madman, or seer. Whether this is as soul-exposing as it might seem, or another mask for the subject to hide behind, is up to you to decide. 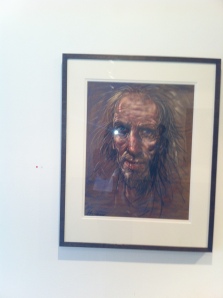 Noah Becker camps it up for his close up. His Self-Portrait (2012) is smarmy with baby pink hues. The subject poses, statesman-like, in a suit and tie, with a neat parting in his grey hair, gazing nobly into the middle distance. As with most politicians, his projected image is too good to be true. 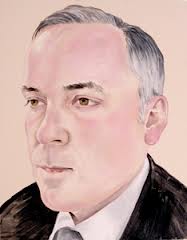 Another playful take on now-you-see-me-now-you-don’t is apparent in Jiro Osuga’s delicate Shadow (2013), where he does indeed paint himself, but decidedly undercover. 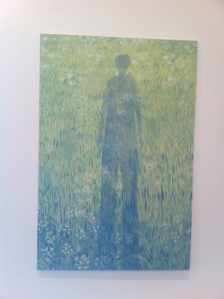 A dark laugh is added by John Kirby’s End Game (2013), which sees what we can only assume is the artist with his face covered by a white hood. A self-portrait with the self taken out of it, it becomes a commentary on the morbid nature of portraiture, which freezes a moment for eternity, while its subject continues our shared and invisible journey to the grave. Like the hood that covers the eyes of the man in front of a noose, portraits pretend that what we can’t see won’t hurt us. 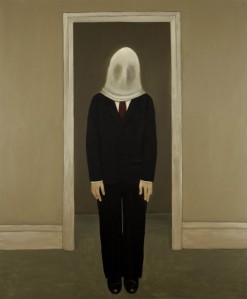 The brilliant Ken Currie, whose show has just opened at the Scottish National Portrait Gallery, also presents typically dark yet  illuminating work. Study (self portrait with self portrait) (2012), like his Unfamiliar Refection (2006), sees Currie’s double not as his image but as his ghostly doppelgänger. It’s not his own face that haunts him, but the face of his dead father. 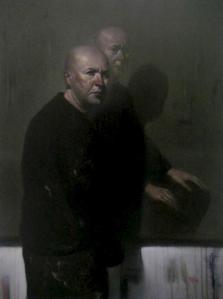 Jiro Osuga’s The Multitude (2013) provides a lighter close to the show. The artist presents a cityscape where every creature, from women in hijab to pigeons and squirrels, has his own face. 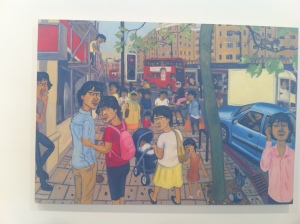 Amusing but ultimately eerie, this fresh work sums up the spirit of adventure that runs through this exhibition. Stranger asks us to reassess the dialogue self-portraits can open in contemporary art, and in turn, the dialogue they can open in our understanding of ourselves. Identity is a tricky thing in the modern world. Now you see it, now you don’t.