The big-name actor James Franco, amongst others, curated this collection of ‘Paintings at the Edge of Reality,’ and I’m sure he is the sole reason for the film reference. Apart from exhibit A, the evidence on the walls, I offer as exhibit B the show’s blurb. The paintings apparently exist ‘between figuration and abstraction, realism and surrealism,’ or in other words, ‘could be any painting from the last 100 years,’ and Cinematic Visions addresses ‘the slippery world of image making and image reading,’ or in other words, ‘what it’s like to look at art.’ In a tour de force of nonsense, the blurb argues that moving through the gallery becomes ‘a kind of tracking shot,’ which would be true of moving through a toilet too, as that’s how eyesight works. It then concludes that ‘the act of looking becomes cinematic,’ which is ridiculously vague. The act of looking is like going to the cinema? The exhibition is cinematic, because we see it with our eyes? Please.

The strongest argument offered is that these paintings, like films, tell a story. Still, in that case, the show could as well be titled ‘Literary Visions.’ I also challenge James Franco to show me a painting that doesn’t tell a story. So I’m going to dismiss this film rubbish, and look at what the exhibition actually is – a set of pleasant paintings that lack a unifying theme.

The opener is Chris Ofili’s Ovid-Windfall (2012), which I first saw at the Titian exhibition at the National Gallery. It’s stunning, but the fact it’s so easily appropriated for this show supports my rant, above.

There is a mythical sub-theme that can also be seen in Inka Essenhigh’s Daphne and Apollo (2013), a sci-fi/fantasy/Marvel comic mash-up that jumps out of the canvas at you, 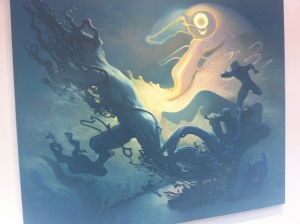 and in Elaine Reichek’s re-imagining of the story of Ariadne as trashy romantic fiction, 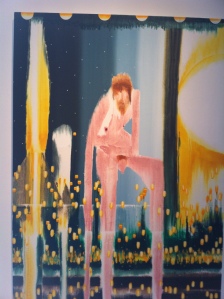 which sees Adam dragging himself out of a primeval sludge, as imperfectly formed as a caveman; the sludge draws attention to the paint itself, running like drips down the canvas, and so the work becomes an interesting reflection on the nature of creation, whether artistic, evolutionary or Biblical.

Portraits form another theme, from Anna Neel’s Ian and Mary (1971), painted from life, but only realist in terms of psychological truth, to Chantal Joffe’s Jessica (2012), a portrait of the actress Jessica Chastain, photographed via Skype and then transformed in a very ‘painterly’ oil painting. An interesting oddity is Sandro Kopp’s Ambassador (2013),

which poses a pet as the Mona Lisa. The intensely public becomes the intensely personal, an enjoyable juxtaposition.

Upstairs, a series of vibrant abstractions tell tales which, as I suggested earlier, could as easily form part of a literary exhibition as a ‘cinematic’ one. Cecily Brown’s Sweetly Reminiscent, Something Mother Used to Make (2013) sees female forms busily engaged in all kinds of activities, and Suling Wang’s Shadow Wing (2013) basically does the same, but with dark, uni-sex strokes. Adriana Varejao’s Monochromo “Jiaguwen” Azul (2013), a visceral work where a set of veins crack though the canvas, suggests a kind of body horror reminiscent of Cronenberg. Okay, you’ve got me there – I spotted a film reference.

Overall, a nice selection of contemporary paintings, very tenuously linked. The problem with the weak link is that it leaves you wandering around the gallery looking for something that isn’t there, which confuses the experience. Franco currently has an exhibition on at Pace London. I only hope his own work is more powerfully presented.

Cinematic Visions runs at the Victoria Miro until  3rd August 2013.