The newest addition to the Tate Modern’s artistic artillery, if you’ve been in a coma the past fortnight and haven’t heard, is Tate Tanks, the industrial chambers under the Tate Modern (and industrial is the word – even the toilets look like something out of 1984) made out of massive oil drums from the building’s previous incarnation as a power station and dedicated to live art. 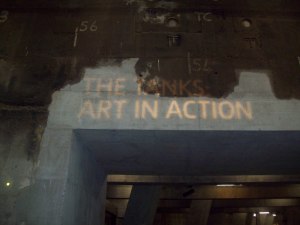 Reviews of the space have been rave, and you won’t hear differently here; dark and cavernous with the whiff of old chemicals in the air, there should be a picture of this in the dictionary next to the word ‘atmospheric.’

The first chamber shows the results of Suzanne Lacy’s three year long Whisper Minnesota Project in three parts, a video projection, an audio track and a video documentary. She gathered and interviewed women aged over 60, culminating in The Crystal Quilt 1987, a performance that took place on Mother’s Day, in which 430 women sat at tables in the centre of a shopping mall, talking and moving their hands at prearranged intervals, recreating the pattern of an actual quilt also displayed here. The resulting video, speeded up so that the whole event plays itself out in a few minutes, is OK. That’s my slightly tepid, but honest, response. You have a sense that modern life rushes on, and some lives may intersect for a moment, and then will vanish awfully fast, but nowadays, how much of an insight is that?

I preferred the red-lit, womb-like side chamber in which composer Susan Stone, as part of the project, mixes the poignant voices of seventy aged women musing on the public and the personal,  the young and the old. Sit there for long enough and the acoustics will make you feel as if you’re the one doing the talking. The ‘We had no radios and no TVs’ speech made me nostalgic for the old days, and I wasn’t even alive then. It may feel as dated as Lacy’s haircut in the accompanying documentary, but it hasn’t lost its power to move.

A stamp inside one of the Tate Tanks

In contrast, Liz Rhodes’ Light Music 1975, also in the first chamber, is timeless. Rhodes’ musical score is made into images, solid light projected on opposite walls from two 16mm film projectors  and as this visual score changes, so does the sound. Rather than watching a performance, the audience is part of the process; their presence shifts the way the light falls, and so changes the music. It’s an ephemeral vision.

The Korean artist Suag Hwan Kim has the second chamber all to himself. If you’ve seen Oldboy, or pretty much any Korean cinema, you may know what you’re in for. It is a divided, hallucinatory and incomprehensible space, where eerie videos show expressions of Hwan Kim’s childhood, masked, bare-chested men play dog and owner, a young girl recalls twisted family scenes, light bulbs lurk in corners and an audio track makes sudden and random demands.  There is a thrill to be had from the sheer creepiness, but entering this particular projected psyche made me want to run back into Lacy’s warm, quilted blanket.

The third chamber is reserved for a rotating program of live, international art, and apparently dwarfs the first two. In it the audience has the chance to get up close and personal with the performing artists. Watch this space.